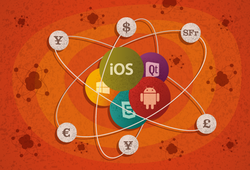 If you haven’t yet filled out the

please do so now! We are still short of 30 entries in order to get better logo placement in the released survey. This is important since the people who read these surveys are of a demographic that’s much harder for us to reach normally.

It would help us greatly if you would convince your friends to fill this out as well. Thanks.

Ideally we’d like this to shrink significantly since one of the main motivations here is smaller size and faster builds.

However, the new VM will be naturally very verbose since bytecode by definition is more verbose than Dalvik which the existing XMLVM implementation relies on. We also embed the GC logic directly into the C code using an ARC like GC architecture (emphasis on the word “like” ARC isn’t a GC) which would also enlarge the VM a bit.

One of the hard goals with the new VM is to be mostly source level compatible with XMLVM but as we are moving forward this is something we are starting to reconsider. We already broke one major compatibility aspect with method signatures. E.g. with XMLVM a class such as this:

With be translated to this in C:

We already changed this to support covariant return type in Java where the method return value must be a part of the signature, so if your return type is void this will work like XMLVM but for any other return type you will get:

This allows us to have two methods with different return values which the VM spec allows even though the Java language disallows it! The javac compiler makes use of that discrepancy to generate things such as covariant return type support.

We are considering a more radical change though, we would like to add to every method an additional argument:

This will allow us to define this as nothing on the current XMLVM code but when building the new VM we will be able to pass the thread context thru the method stack rather than look it up constantly which is an expensive operation. In the new VM this will translate to something like:

Which will effectively compile to this:

This will allow us to avoid expensive locking and critical sections and easily keep track of the stack.