It’s often an Apples and Oranges comparison since Codename One is so different from everything else.

To properly evaluate a cross-platform framework, we often look at our existing experiences and evaluate based on what we know.

The set of options below present some of insights about how we match up to other cross-platform solutions in the market today. But first lets start up with some of the Codename One benefits. 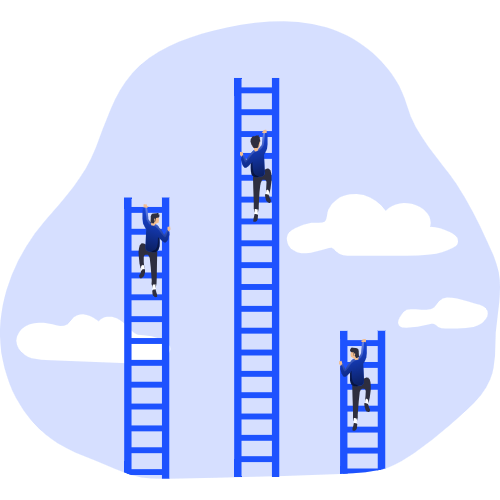 Love it or hate it, Java is still king of the hill. With 9-10 million active Java developers and a permanent spot as one of the top programming languages. The language/platform is familiar to tens of millions of developers world wide guaranteeing code maintainability well into the future.

Developers can use the rich tools available for Java developers such as IntelliJ IDEA/NetBeans/Eclipse to work with the code. Codename One has its own GUI builder and many niceties to track issues in your code. The biggest benefit though is in the build server which generates a native application for you without having to deal with all of the complexities of building a native app for every platform.

Due to its unique lightweight architecture, Codename One boast greater portability than HTML5 and more supported devices! Thanks to its unique cloud build system, it doesn’t require any native toolchain or dedicated hardware.

Most of the Hybrid-Web solutions are fundamentally built on Cordova/PhoneGap to gain access to native OS features. Codename One’s native capabilities have the following additional advantages over Hybrid-Web frameworks:

Most of such frameworks offer limited code reusability and requires rewriting the UI for every platform. We think the biggest difference between Codename One and all of these tools is that we are a Java/Kotlin based true “WORA” solution.

Xamarin might seem like a similar tool to Codename One using C# instead of Java, but this is misleading as the tools are so different conceptually, they have very little in common.

Google’s J2ObjC compiler is an open source project that isn’t really comparable to Codename One and solves a completely different problem. However we get asked about this frequently so this is a direct quote from their site:

J2ObjC does not provide any sort of platform-independent UI toolkit, nor are there any plans to do so in the future. iOS UI code needs to be written in Objective-C or Objective-C++ using Apple’s iOS SDK (Android UIs using Android’s API, web app UIs using GWT, etc.).

Other than that, the tool just deals with the iOS porting of business logic. Requires a Mac and requires that developers work with Xcode. It doesn’t include a full featured garbage collector (the OS X GC mentioned in their wiki was deprecated on OS X and ARC is not a GC) and isn’t really a cross platform solution.

Large parts of Codename One were inspired by the design of Swing. However, a great deal was fixed. Codename One fixed many concepts in Swing thanks to hindsight and experience in Swing development e.g.

JavaFX – JavaFX got off in a completely different direction by using a scene-graph graphics layer approach to GUI. This is very much the approach taken up by Flash and one of the main stumbling blocks for flash on mobile devices.
It is remarkably hard to port a scene-graph implementation consistently to every platform and then integrate it with the native platform widgets as we are sure the guys at Oracle have found out. Making this sort of implementation performant is even harder as the guys from Adobe found out.
While Swing had a lot of traction (30% of the GUI development market at its peak) JavaFX never reached any measurable market penetration. Its only major users are Swing shops that have no future migration path other than JavaFX. Oracle itself fired most of its developer advocates and JavaFX related teams, it doesn’t use JavaFX for any of its core products, e.g. MAF has no relation to JavaFX.
Up until recently there was no JavaFX on mobile devices and arguably there still isn’t, a team at Oracle open sourced a half baked JavaFX for iOS implementation that suffers greatly from the limitations mentioned above. This was picked by some developers and shipped as a product for mobile application development. We consider such efforts to be callous & irresponsible to the developers who look at them as a serious solution, it breeds confusion within the community that’s already fragmented.

To further contrast these issues with Codename One, since the project is so huge, complex and clearly not supported by Oracle picking this up will leave developers in an untenable state where bugs can’t be fixed and issues can’t be addressed (e.g. bug when migrating to iOS 10).
Codename One is much smaller in terms of code size but has a much larger active developer community, because projects are translated to native OS projects they should be buildable and maintainable even without Codename One’s support.

Oracle MAF (Mobile Application Framework) is a tool that provides the ability to create some iPhone applications using a combination of Java EE and HTML5 essentially bringing the worst of all worlds together.

The tool is marketed as a free tool which is misleading since its free for development but not for distribution. The cost is per application and is in the range of 50,000 USD.

MAF suffers from all the problems of Hybrid-Web (mentioned in the section) and it adds to that all the complexity of working with a Java backend without removing those other complexities. To make matters worse, since the VM is embedded into the code, you are limited to an interpreted mode which means slow performance on top of the existing HTML5 overhead.