Survey Results With Some Comments/Thoughts

Survey Results With Some Comments/Thoughts 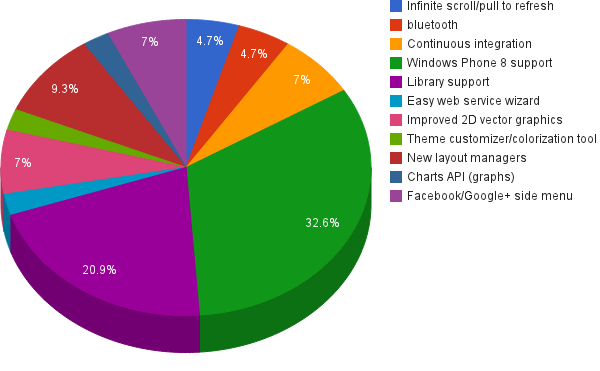 Thanks for answering our questions about what you want in Codename One 1.1, your answers were very interesting and your comments are always helpful. Before getting to the actual results I’d like to cover some of the comments made in some of the responses which I think broadcast that we need to communicate what we have better:

A frequent request is for more ad network integration

we are working on those but getting the agreements through and adapting them is difficult. These two specific networks are specifically difficult, Google is very rigid on AdMob and Apple is worse. We are constantly talking with networks about adding support for them (e.g. Zooz and Startapp which were recently integrated), but this is a time consuming slow process.

. Did you checkout MultiList? Check out the up to date developer guide which covers them, they are pretty lean and also very easy to work with in the GUI builder.

to which I would like to answer that rendering is pretty fast already. If you feel performance is slow a survey isn’t the place to say that, use the discussion forum and read the developer guide tips.

Mutable images are inherently slow on iOS and drawing most graphics primitives isn’t as fast, however image drawing etc. should be pretty fast.

One poster asked for

which we plan to do in the future and actually have all the pieces in place for this. It would just require quite a major effort from us to actually accomplish this so this isn’t planned for 1.1.

We got one request for

, I’m guessing that we would have to implement bluetooth, NFC, sockets, motion sensor and only then proximity if at all. There is just too much ground to cover in these things.

Another commenter asked for

. We already support static annotations, dynamic annotations won’t be possible on older platforms (which might be fine) but would require some reflection capabilities. Since a mobile application is statically linked runtime annotations might be completely redundant since we know of all classes during compile time, that won’t change since we translate bytecode to native.

Most of the functionality used by annotations is useful with dynamic loading, I would be interested to hear use cases though so feel free to submit issues with specific cases you would want to enable.

Lets look at the results and then I’ll try to interpret them. Feel free to give your own spin in the comments below.

The first chart represents the primary feature, listed by rank below.

Everything below this got 0 percent.
The second chart shows the options when picking one of 3 options:

My interpretation of the data is this: