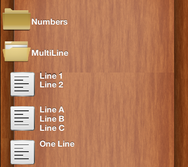 recently added an implementation of a

which is pretty cool and very timely since we are just about to release our own socket library and unlike his work which supports all Codename One targets we currently only support iOS & Android.

This simple example allows you to create a server and a client assuming the device supports both:


Also in the coming update to Codename One we will include support for multiline entries in trees and more arbitrary tree node types. To support that we added a new flag to indicate if the tree is multiline in which case each node would be a SpanButton instead of a button. This is pretty simple for the basic use case just invoke setMultilineMode(true).


Unfortunately for the complex use cases up until now when we customized a tree entry one had to override the method: protected Button createNodeComponent(Object node, int depth), which relies on the Tree’s usage of buttons. So that method is now deprecated (although it will still work for now).


You should now override:

protected Component createNode(Object node, int depth), which allows you to return any component type. However, the tree needs methods to receive a click event from the node and to set an icon both of which aren’t available in Component. So for that purpose you might need to override: protected void bindNodeListener(ActionListener l, Component node), and: protected void setNodeIcon(Image icon, Component node). Just override them to support your custom component type unless its a Button/SpanButton (or subclass) both of which are supported.