On The Side, Up On Top

On The Side, Up On Top 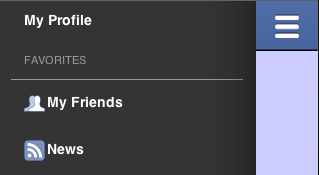 A lot has happened with the side menu bar (the

) since we initially launched it. We now support a lot of new features seamlessly such as swiping the sidemenu in/out and various other capabilities. The other day we added support for side menus on the right and top as well as multiple buttons on the side menu title bar.


So lets get started with the features, first is one of the newer features up our sleeve, the ability to place a side menu on the right, top or on both sides of the title (as in the facebook app). You can


Or as you might see in this more detailed example where you can just swap menu placements on the fly:


This is remarkably useful but its also somewhat problematic for some developers, the SideMenuBar is pretty complex so if we just set a button to the custom component and invoke showForm() we will not have any transition out of the side menu bar. Thankfully we added several options to solve these issues.


The first is actionable which you enable by just turning it on as such: cmd


This effectively means that the custom

component will look exactly the same, but when its touched/clicked it will act like any other command on the list. This uses a lead component trick to make the hierarchy (or component) in customCmp act as a single action.


There are several additional options that allow you to just bind action events and then “manage” the SideMenuBar e.g.:


The TitleCommand property allows you to flag a command as something you would want to see in the right hand title area and not within the SideMenu area. Just place it into a component using cmd.putClientProperty(“TitleCommand”, Boolean.TRUE);


Last but not least w

e also have some helpful theme constants within the side menu bar that you might not be familiar with:


I hope you will have fun exploring the new features of the side menu bar.