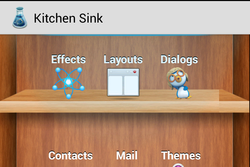 Its been pretty busy around here the last couple of weeks. However, we still introduced a couple of new API’s and abilities besides the many bug fixes that constantly go in.


We deprecated JSONParser.parse(Reader) in favor of Map<String, Object> parseJSON(Reader i). This is effectively the exact same class with one minor difference, it returns HashMaps/ArrayLists rather than Hashtables/Vectors to represent the hierarchy.

Besides the modern aspect of the new collections they are also slightly faster due to the lack of synchronization calls.

which asks for improved overscroll behavior, we can’t get it to be 100% accurate but we got it as close as possible with the current rendering architecture.


Normally to build the model for a renderer of this type we use something like:


What if we want

componentName to be red? Just use:


This will apply the uiid “red” to the component which you can then style in the them. Notice that once you start doing this you need to define this entry for all entries e.g.:


Last but not least we felt the need to simplify the very common task of download. Up until now downloading a file required a bit of code, where you needed to open a connection request and do quite a few other things. There is really no justification for that.

Which simplifies the whole process of downloading a file.