is winding down as I’m starting to write this although I’ll probably post this after the videos are up to reference some of the interesting sessions I saw. Unfortunately JavaZone doesn’t post workshop videos so my workshop won’t be available, but frankly it wouldn’t have worked well in video since it was relatively interactive hence there was no presentation flow. You can see the gist of the workshop in the video I posted

a couple of weeks ago

. The next few paragraphs are about JavaZone itself and the trip, if you want to read about the session highlights just scroll down…

throne, its hard to make out the details with my awful Nexus camera but these are actually quite a few real keyboards dyed in silver that are used to form a chair.


JavaZone started for me with the great

speakers dinner, got to meet lots of great guys and eat some of the great JavaZone fair which deserves a paragraph of its own… 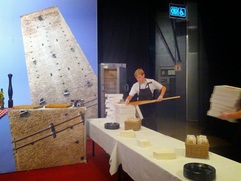 The real star of JavaZone is the food though, its hard to say this but I finally think JavaZone broke me… There was literally too much and it was all good. I totally pigged out!

JavaZone doesn’t have meals it has continuous food integration (or continuous delivery, frankly it felt like a waterfall). This effectively means that there are no lunches/dinners. Food starts pouring out around 10 and just doesn’t stop until 4-6pm, so you can just walk around all day picking something here and there whenever you feel like it. Just to give you a sense of the available foods:

Pizza, freshly made check out the photo. Some people say that there is no such a thing as bad pizza, I strongly disagree. But this was good pizza which is pretty amazing for conference fair.

Amazingly I’m sure I’m missing quite a lot as I’m writing all this from memory!

The guys and gals running the show are all pretty cool people as is evidence by all of the above, unfortunately this year there was no new JavaZone t-shirt (although they gave a great waterbottle which my spouse immediately confiscated for her own use) so I stopped by their booth and they gave me this t-shirt.

That shirt is amazingly cooler than the one they we

re wearing themselves, no wonder they kept it hidden!


The party and trip after the conference are also cool things but I couldn’t go on the trip and was so exhausted I barely functioned at the party. Although it was at a great club and the band was good.


There were many great sessions and speakers this year, I can’t possibly cover everything and I was running around so much I barely had time to see it all (despite the overflow room which is the greatest concept in any Java conference!).


You can check out the videos of all the sessions here:

Here are the ones I went to mostly in order of appearance: