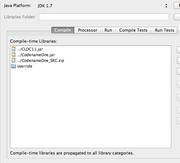 so its probably a good idea to revisit this subject again and clarify all the details.


The first source of confusion is changing the classpath. You should

the classpath or add an external JAR via the NetBeans/Eclipse classpath UI. The reasoning here is very simple, these IDE’s don’t package the JAR’s into the final executable and even if they did these JAR’s would probably use features unavailable or inappropriate for the device (e.g. java.io.File etc.).

There are two use cases for wanting JAR’s and they both have very different solutions:

which covers it pretty accurately.

You can create a cn1lib in NetBeans although its really just a simple ant project with some special targets and a simple ant task for stubbing. In it you can write all your source code (including native code and libs as described below), when you build the file you will get a cn1lib file that you can place in your projects lib directory.


After a right click and refresh project libs completion will be available for you and you will be able to work as if the code was a part of your project.

For the second use case of existing JAR’s we have a more complex situation, the JAR could depend on features unavailable in Codename One and even if it doesn’t it might be compiled in a way that isn’t supported by Codename One.

So taking an arbitrary JAR off the internet and expecting it to work on a mobile device is something that will probably never happen for any platform.

, some JAR’s might even work on J2ME/RIM. To make use of this capability we can just place the JAR’s as is under the native/android directory (and respectively for J2ME/RIM). The way to go for iOS support would be to use .a files (iOS static libraries) which will get linked with your app in the same way that the JAR’s get linked.


The problem is that you still won’t be able to use the JAR (or .a file) from

within your code, this JAR would be platform specific and you would need to write the “bridging” code to connect it to the native layer. To learn more about native interfaces I suggest reading the developer guide but basically what you need to do is define a native interface e.g.:


Notice that the jar will not appear in your IDE’s code completion and the code might be marked as “red” with error messages. That is because we can’t compile that code on the client, only on the server since we don’t have the native Android/iOS SDK’s installed on your PC or Mac (and even if we did, integrating so many difference pieces of software is problematic).

an arbitrary JAR off the internet is something no one will ever be able to fully deliver on, although we do hope the cn1lib format will take off since it is pretty open and has many advantages over the standard jar format (proper javadoc based code completion is HUGE).