It's In The Bag

It's In The Bag 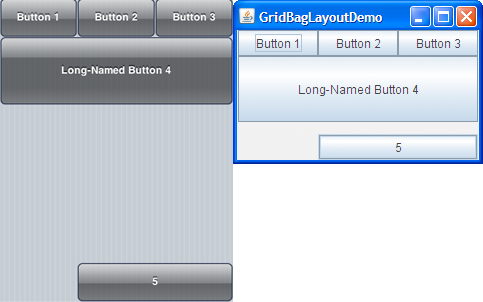 one of the most notorious of the layout managers in Java

in fact for many developers it symbolizes the failure of the layout manager concept. That is the main reason why we never added it.

and he asked me whether we had gridbag support. I answered that we do not and repeated the regular “no one likes it” line, turns out he does like it and has a lot of Swing code that uses GridBag!


Porting a Swing/AWT layout manager to Codename One is pretty close to trivial, there are very few things you need to actually change.


Other than those things its mostly just fixing method signatures and import statements which are slightly different. Pretty trivial stuff and GridBagLayout from project Harmony is now working on Codename One.

So to show this off I

took this code from the Java tutorial

and ported it to Codename One, pretty easy stuff:

The code is almost the same although I did need to make some adaptations e.g. JButton to Button, add to addComponent and reverse the order of arguments to addComponent. Other than that it was pretty trivial.

Now this stuff probably won’t make it into the GUI builder in the forseeable future, but if you are hellbent on GridBag or porting some Swing code this should be pretty convenient. Its also a great case study if you want to port some of your other favorite layout managers such as MiG or FormLayout.