Image Viewer From The Web

Image Viewer From The Web 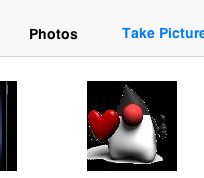 I’ve been working on demos for JavaZone and built something small that has been asked a few times. Some developers were looking for

support in image viewer but that’s not a very good approach since URLImage expects images to be at a specific resolution and is thus very bad for images with unknown dimensions. However, ImageViewer thrives on showing and zooming full sized images.

what I was looking for, so I created a simple list model that just streams images, you can use it with image viewer like this:


The list model is just a plain old list model that expects the placeholder image to be an encoded image you have already loaded. This implementation expects images to have an ID which we use in the createImageURL method. Notice we could just use the image index but since that might change (user deletes images etc.) we needed to have ID’s generated by the server. We’ll have the full demo up with the server side code for JavaZone: