Hands-on With The Blackberry Tools On The Z10

Hands-on With The Blackberry Tools On The Z10 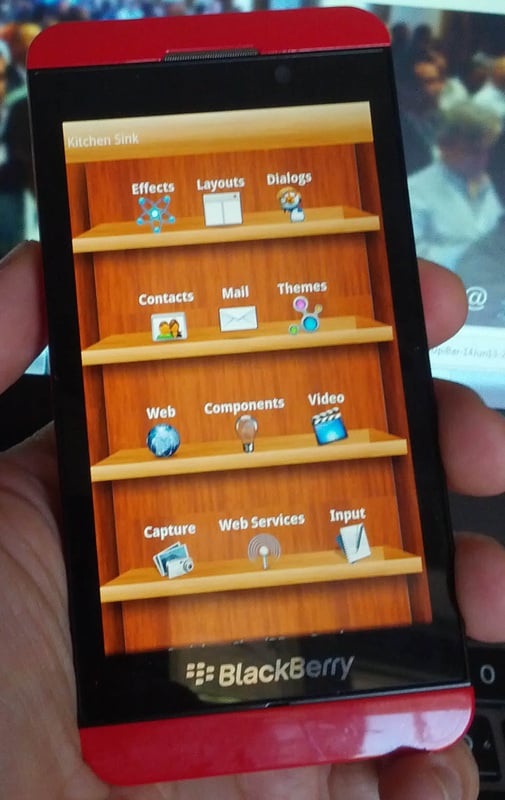 Note: skip to the bottom for some instructions on working with the BB Z10.


Lately we’ve been asked by one of our pro customers to fix some issues which occurred only on the z10 device. I thought this would be an easy task: just grab the tools from the blackberry site and then use them to debug the issue. I was quite wrong… Apparently the emulator can only run in a virtualization environment.


OK that shouldn’t stop me, I grabbed the VMPlayer installed it then installed the BB emulator and had myself a running emulator… Or at least I should have been so lucky! My machine couldn’t run it because the display driver wasn’t supported, took me a while to figure this one out. I tried on another PC instead and was luckier, it worked I had a emulator running.


Blackberry 10 is in many regards more like Android than older blackberries. So it doesn’t support our existing BB apps, however it does support running Android apps if they are packaged specifically for it.


So I started working on

installing the android build of the app, should be an easy task, right?

Wrong again. Spent a couple of hours understanding the process of converting the .apk to a .bar file and then the signing process. Finally I, got a valid .bar file and installing it wasn’t hard. The app was finally running in the emulator and I got a tingling happy feeling all over.


Then the app crashed which was pretty much what our customer complained about, so lets take a look at the log or console. Should be somewhere, right?


Wrong, you need an ssh client to connect to the VM and then look for the file somewhere… That’s inconvenient but doable, I really wanted to know what the hell happened.


Launching Putty and connecting to get the log then finding the path, trying to get in and it seems that I don’t have permissions to enter the directory for the log. Well that broke me, how do they expect anyone to develop apps for this?


Some more googling and I came to the conclusion that the only way to debug this is with a device.


Checking the problem on the device should be easier, it seemed that the OS version on the device was out of date and since they push the OS updates through the carrier this posed a problem.

some more googling I found a manual hacking process to manually update the OS. Got the approval from the owner (I didn’t think I could hack a $1799 loaner device without that) and I was able to update the z10 OS, now lets see what’s going on.


After some more research it seems like the easiest way would be to use the eclipse plugin with the device, grabbed the plugin some more setups and got it working and I’m getting the output in the ddms, now finally I managed to debug the issue and to figure out what was the problem.

conclusion – Blackberry… Please… show some love for developers, if it’s not practical to develop properly with the emulator don’t ship it and I thought your JDE was awful.

The device itself is surprisingly decent, it feels like they have a slim chance to maintain some market with this hardware.

For those of you who want to build apps for Blackberry OS 10, you need to start with your Android APK (send an Android build in Codename One) then converting the apk to a bar file which can be done in a few ways:


We would like to simplify this process for our developers but we are running into some issues with the Blackberry command line tools and their signing process. It seems signatures aren’t stored in any standard way.