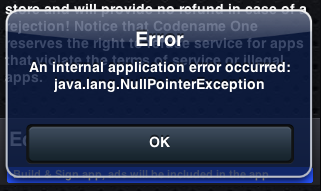 Handling errors or exceptions in a deployed product is pretty difficult, most users would just throw away your app and some would give it a negative rating without providing you with the opportunity to actually fix the bug that might have happened.


Google improved on this a bit by allowing users to submit stack traces for failures on Android devices but this requires the users approval for sending personal data which you might not need if you only want to receive the stack trace and maybe some basic application state (without violating user privacy).


For quite some time Codename One had a very powerful feature that allows you to both catch and report such errors, the error reporting feature uses the Codename One cloud which is exclusive for pro/enterprise users. Normally in Codename One we catch all exceptions on the EDT (which is where most exceptions occur) and just display an error to the user

as you can see in the picture. Unfortunately this isn’t very helpful to us as developers who really want to see the stack, furthermore we might prefer the user doesn’t see an error message at all!

addEdtErrorHandler in the Display class. Adding this to the Log’s ability to report errors directly to us and we can get a very powerful tool that will send us an email with information when a crash occurs!