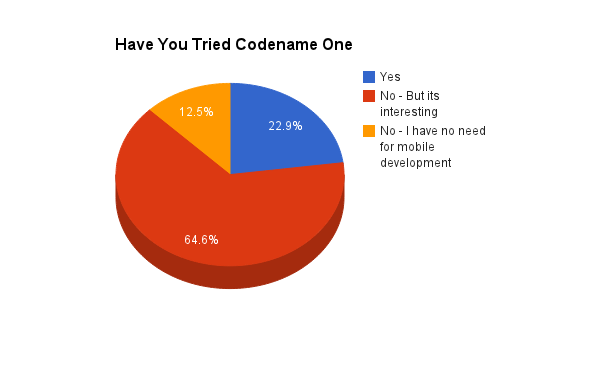 Before we launched our

for JavaOne tickets with

we sought out guides/tutorials about running such a promotion, unfortunately we didn’t find anything useful so we had to improvise and work by instinct. This post will also cover some of the statistical results about the Java community so if this is the reason you are reading this post skip down for some interesting takeaways.


The idea started when one of our talks got accepted to JavaOne, suddenly we had two extra tickets (we got 3 tickets with the booth) so we could give away two tickets. From our experience we came to the conclusion that most developers don’t know about Codename One yet and that is probably the most important thing we need to improve in our outreach. So here are a few conclusions we came to in no particular order:

1. We need a partner to handle the giveaway – this removed the bias from us. We have an incentive to give the tickets to our best customers so we can’t really be fair. That’s why we picked

as a partner – we needed a partner who is focused on Java (check), who has a big enough audience (check), whose audience isn’t already familiar with our product (check). This is probably the most important step, most of our contestant came from Java Code Geeks and as you can see from the chart to the right. Most of the people who entered our contest didn’t know about Codename One in advance and were happy to find out about us.

3. We created incentives to social share – most of the people who would read

are probably up to date with the latest technology, but their friends (and friends of friends) might not be. The true value of the promotion is social share which is why we made the contest require sharing. Initially we wanted the person with the most retweets/shares to “win” but

objected to this approach (in hindsight I think he was right to object) claiming that it would rule out people who don’t have many friends. It would also have promoted cheating which is a huge problem.

4. We created very detailed rules for the competition – yes, most people didn’t read them (as is obvious by some of the submissions we got) but there are now rules that the raffle itself should follow. We used Google docs to collect details and signups which allowed us to collect a lot of structured data.

We included an entirely optional survey and 99% of submitters answered questions within the survey despite the optionality!

5. We promoted the giveaway in our respective newsletters which is usually the most effective way to get people to signup. However, a single retweet by @java is probably more valuable than an 18k strong mailing list.

6. We used Facebook, Twitter and adsense ads – all charged us and delivered literally nothing. Facebook charged for clicks that Google Analytics didn’t show. Normally I would chuck this as a Google analytics omission however we saw a lot of clicks on the Facebook side and no submissions to the contest form… This seems to indicate that Facebook is charging for fraudulent clicks! 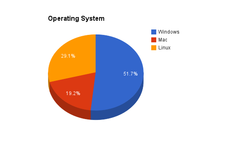 We asked developers which operating system they were using and were pretty shocked by the results. We see Macs all over JavaOne and all the conferences I go to, but it seems that Macs are a minority to Linux! 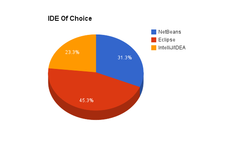 The IDE of choice brought a pretty predictable result although much closer than we would have thought as the number of answers grew the distance between the IDE’s grew as well with NetBeans surpassing IDEA and Eclipse growing in strength. However, the race between the IDE’s is still very real and despite Eclipse lead its position seems very assailable in the market. Our decision to support all 3 IDE’s seems like an excellent decision in this light. 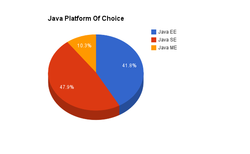 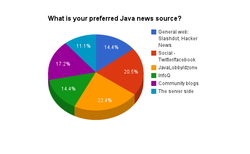 What is your preferred Java news source, here we excluded Java Code Geeks since we assumed unreasonable bias in the results (according to other stats it would probably occupy well over 50%). Notice that while some outlets (e.g. dzone) are clearly dominant there is no true leader. When targeting the Java community we literally need to be everywhere. 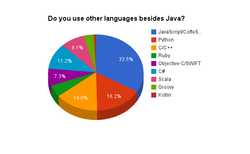 Do Java developers use other languages besides Java?


Honestly we should have asked what for? JavaScript/CoffeScript took the lead but do developers use it for HTML or do they use server JavaScript e.g. NodeJS?

The main motivation behind asking this question was potential support for other languages in Codename One especially JVM languages e.g. JRuby, Scala etc.


We probably should have phrased a few different questions to get refined answers.


I hope you found these results useful and illuminating. For the next contest/survey we will run we picked up the following lessons:

1. Better limits on the goals of the question – e.g. with the languages besides Java we didn’t quite get an answer. I would probably ask, are you interested in other languages? Would you prefer another language?

2. We would not waste a cent on Advertising.

4. As pleased as we were with the work done by the guys at Java  Code Geeks, it was crucial for us to come prepared. We phrased the contest terms and defined most of the conditions/questions. Your partner can be very helpful but only you can define your own expectations and results.