Deeper In The Renderer

Deeper In The Renderer 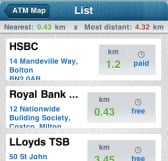 When Chen initially drew up the proof of concept for LWUIT he copied the concept of list renderers from Swing, this was one of the most hotly debated issues between us. Whether we should aim for familiarity for Swing users or simplify what has always been an API that novices wrestle with. We eventually went with the familiarity approach, a decision we both agree today was short sighted.


Unfortunately changing the renderer API isn’t practical at this stage but we simplified a lot thanks to the GenericListCellRenderer which powers GUI builder list renderers. We simplified this further with the MultiList component which has a default renderer that’s pretty powerful to begin with.


However, this simplicity has resulted in developers using lists without

quite understanding why they behave in this way. In a normal container all components are kept in a Tree like hierarchy that we can render (essentially similar to DOM). A list however doesn’t contain any components within it so it can hold a million entries with the same overhead it would have when holding 100 entries.


So if the model has 1m entries we don’t need to create 1m components since we will reuse the renderer for every entry. We also don’t render elements that are invisible.

There are problems with this model though:

Why should I use a List? Why not just use a List or a Container with BoxLayout Y?

That’s actually our recommendation for most cases, List is often too much of a hassle for some use cases and we try to avoid it in many applications. It is now also possible to create

relatively easily although you might see performance degrading after a while.

So assuming you pick list lets see how you can make better use of it.


So assuming I have a list renderer that has a button named X on the the side, dealing with this differs between a GUI builder app and a handcoded app.


Notice that the method above will not work for MultiList or a list containing MultiButton’s since those are composite components and can’t be separated to an individual component within.


If you are building a handcoded renderer this is a bit harder:


There are a few other features in the generic list cell renderer that aren’t well documented: