Part of what makes Codename One unique is its architecture. You write your app in Java or Kotlin, using the Codename One cross-platform, extensible class library, which includes a rich set of UI widgets, and APIs for nearly everything a mobile app could need. Location APIs, Contacts, Maps, Audio/Video, and more. 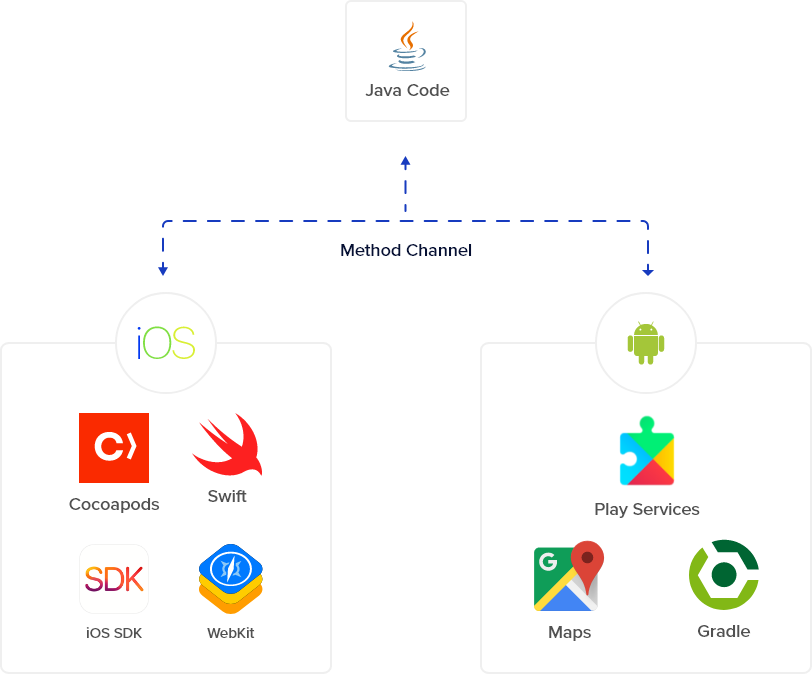 Codename One also allows you full access to each platform’s native APIs via native interfaces. Native interfaces are easy to create in Codename One. You just create a Java interface that extends Native Interface, then use the Codename One plugin to generate stubs for the native implementation.

Then you just fill in those stubs with your native code. Using native interfaces, you can even integrate native UI widgets into your app seamlessly.

The Codename One runtime

This includes a subset of the JavaSE 8 classes (e.g. java.util, java.lang, java.io, etc…) a set of UI widgets, as well as other packages for accessing device functionality such as location, media, contacts,and maps.

This layer, written in the platform’s native language (Objective-C on iOS, Java on Android, C# for UWP, etc..), is the glue that allows the Codename One class library to access native APIs.

You can also make use of 3rd-party native libraries via Native interfaces. You can embed native libraries directly in your project’s “native” directory, or you can use build hints to add dependencies in cocoapods (iOS), gradle (Android), and Nuget (UWP).

There is already a wide assortment of cn1libs developed by both Codename One and third-party developers. Some notable “cn1libs” include Google Maps support, Websocket Support, and Parse support.

And the best part of Codename One apps
is that they are compiled into 100% native
code to be blazingly fast.
Get Started
Learn More