Most new devices contain one version of sqlite or another; sqlite is a very lightweight SQL database designed for embedding into devices. For portability we recommend avoiding SQL altogether since it is both fragmented between devices (different sqlite versions) and isn't supported on all devices.

SQLite is supported on iOS, Android, UWP (Universal Windows Platform), RIM, Desktop & JavaScript builds. However, the JavaScript version of SQL has been deprecated and isn't supported on all platforms.

You will notice that at this time support is still missing from the Windows builds.

The biggest issue with SQLite portability is in iOS. The SQLite version for most platforms is threadsafe and as a result very stable. However, the iOS version is not!

This might not seem like a big deal normally, however if you forget to close a connection the GC might close it for you thus producing a crash. This is such a common occurrence that Codename One logs a warning when the GC collects a database resource on the simulator.

SQL is pretty powerful and very well suited for common tabular data. The Codename One SQL API is similar in spirit to JDBC but considerably simpler since many of the abstractions of JDBC designed for pluggable database architecture make no sense for a local database.

The Database API is a high level abstraction that allows you to open an arbitrary database file using syntax such as:

Some SQLite apps ship with a "ready made" database. We allow you to replace the DB file by using the code:

You can then use the FileSystemStorage class to write the content of your DB file into the path. Notice that it must be a valid SQLite file!

Working with a database is pretty trivial, the application logic below can send arbitrary queries to the database and present the results in a Table. You can probably integrate this code into your app as a debugging tool: 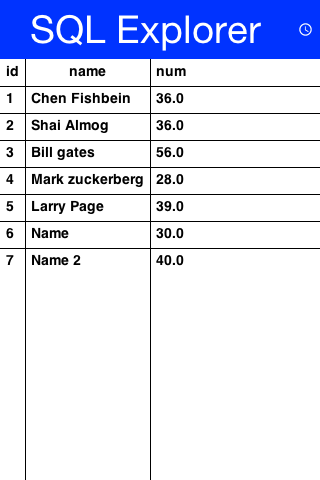 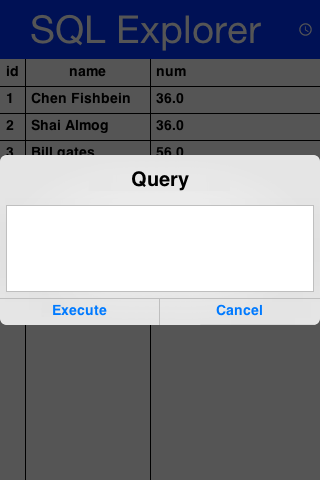